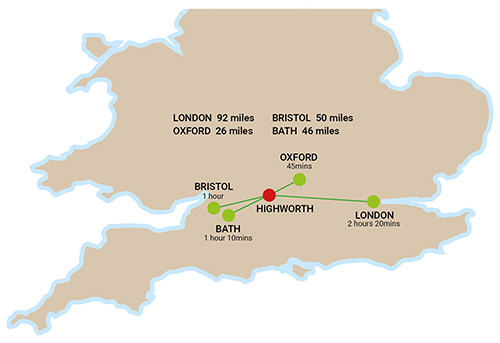 Highworth is an ancient hill top market town situated on the edge of the Cotswolds only four miles from the River Thames and close to Swindon and its many facilities. John Betjeman said, “l have never seen Highworth given due praise in guide books for what is one of the most charming and unassuming country towns in the West of England.” The town centre is a remarkable conservation area containing 84 listed buildings plus a Grade l listed church.

There are numerous stories and events and people that contribute to Highworth’s unique and special character. They include being a cavalier stronghold during the civil war, having a postmistress with a pivotal role in the British Resistance movement during World War II, running the official ABBA fan club from a house in Sheep Street, the mystery of the secret tunnels under the market place and not forgetting the many sightings of the ghostly monk!

PLEASE CHECK WITH INDIVIDUAL BUSINESSES AND ATTRACTIONS TO SEE CURRENT OPENING HOURS AND COVID-19 RESTRICTIONS THEY HAVE IN PLACE BEFORE VISITING, THANK YOU.
Loading...

FEATURED THINGS TO DO IN HIGHWORTH

Wildlife Walk with Neil George. The birds are arriving, and the [...]

Pentylands Country Park Located to the west of Highworth the park is [...]

Highworth Recreation Centre If you're looking for something active to do [...]

Highworth Museum Highworth has it’s very own museum housed in the [...]

Highworth Railway Exhibition Currently on display in the Highworth Museum, which [...]

Wildlife Walk with Neil George. The birds are arriving, and the [...]

Ciao Eatalia Highworth Highworth’s only independent Italian restaurant! We are an allergy-friendly [...]

Tasty Garden Chinese Takeaway We let our customers speak for us: [...]

TT Linnet We let our customers speak for us: "The latest addition [...]